It is OPSBA’s goal to negotiate fair and equitable collective agreements through the collective bargaining process. Our priority continues to be the improvement of student achievement and well-being. That remains the focus of our bargaining.

The collective bargaining framework for the education sector features a two-tier bargaining process, involving both central and local bargaining. Central bargaining typically includes significant monetary and policy issues (e.g. compensation, benefits and paid leaves), while local negotiations typically involve non-monetary issues or matters that are specific to the local board.

At central negotiations, OPSBA represents all 31 English public school boards in Ontario. Participants at the central level include the government and trustees’ associations as co-management partners, bargaining with teachers’ federations and education worker unions. OPSBA negotiates with seven bargaining groups/federations, which are listed below. 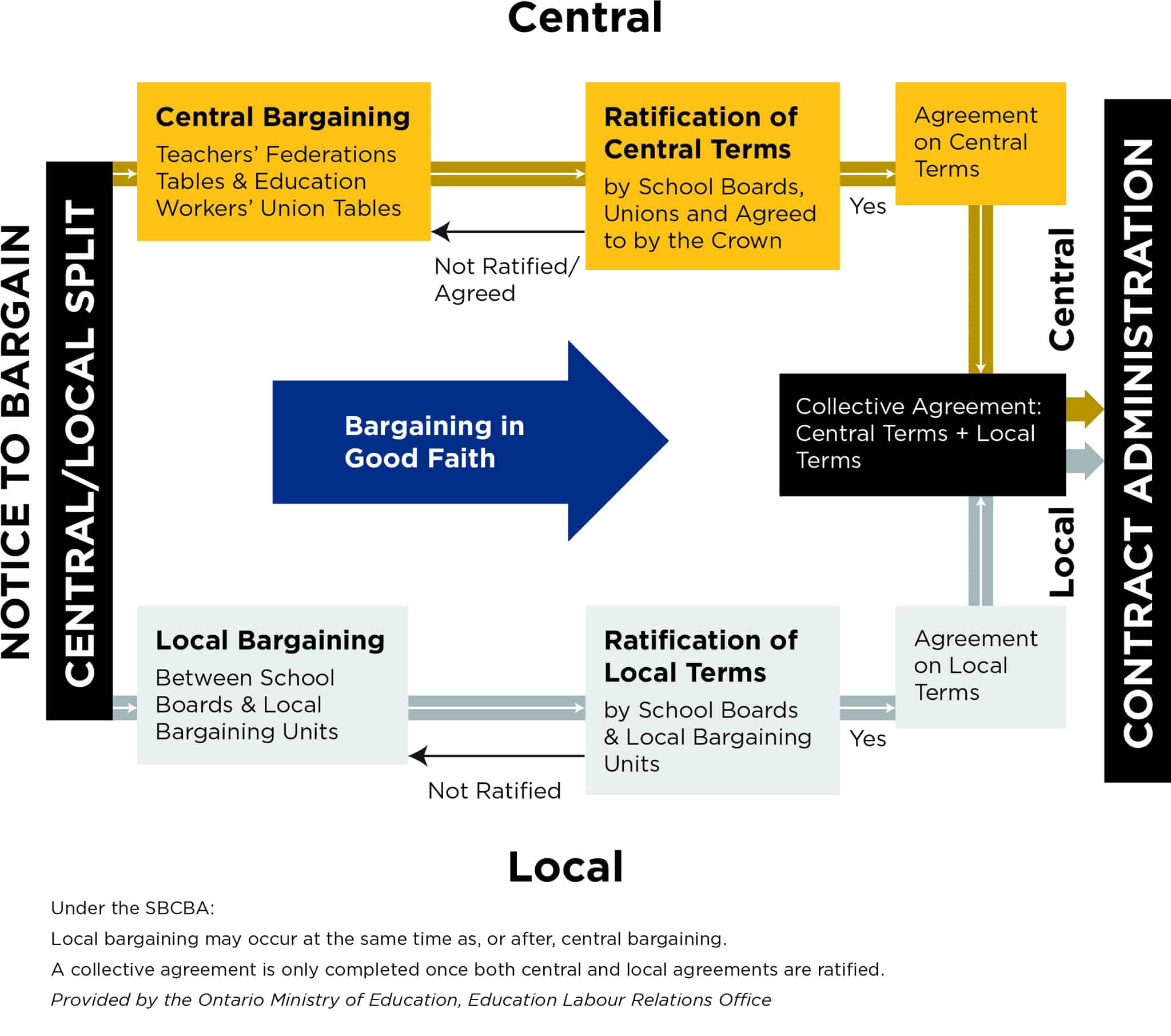 Ontario education sector collective agreements expire on August 31, 2022. However, under the Labour Relations Act, these agreements remain in effect beyond their expiry date until a new contract is reached or until the parties are in a legal strike/lockout position. It is extremely rare for a new agreement to be reached prior to the expiration of the previous agreement.

The parties are required by legislation to meet and to bargain in good faith. This means that each side must make every reasonable effort to reach a collective agreement.

At any time after bargaining starts, either party can apply for conciliation. Conciliation involves an application to the Ministry of Labour requesting the appointment of a conciliation officer who will meet with the parties and help them reach a settlement.

When conciliation fails, the Minister of Labour can issue a notice informing the parties that he or she does not consider it advisable to appoint a Conciliation Board. This is known as the no-board report.

A strike is a cessation of work, a refusal to work or to continue to work, a slow-down or other concerted activity on the part of employees designed to restrict or limit what they do. A strike is any action or activity by teachers and education workers that is designed or expected to have the effect of curtailing, limiting, or interfering with: the normal activities of the board or its employees; the operation or functioning of schools or programs; and the performance of teachers and education workers as set out in the Education Act; or, a regulation including the withdrawal of services. This includes actions described as “work to rule.”

Several things must occur to be in a legal position to strike or lock-out:

In addition, at least five days before the strike begins, the employee bargaining agency must give written notice of the strike indicating the date that the strike will begin.

A lock-out is when an employer closes a workplace, suspends work or refuses to continue employing a number of employees during a labour dispute. Like a strike, written notice must be submitted, in this case by the employer bargaining agency, at least five days before the lockout begins.