The purpose of OPSBA’s Advocacy Day meetings are to re-introduce OPSBA and its priorities to the government and the opposition parties. It is also an opportunity to increase and elevate the overall awareness of the Association and its advocacy efforts. 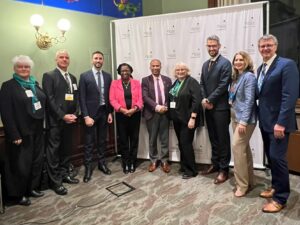 OPSBA’s November 2022 Advocacy Day was a tremendous success. Board of Directors members and student trustees spent the day at Queen’s Park attending Question Period, meeting with their local MPPs, and participating in the evening reception. In total, OPSBA representatives met with over 50 MPP offices either in meetings or at the reception. This includes meetings with the Minister of Education, the two Parliamentary Assistants, and the education critics from the New Democratic Party, the Ontario Liberal Party and the Green Party of Ontario.

This year’s MPP package included handouts that focused on:

OPSBA secured a series of meetings for OPSBA’s Executive Council to participate with one provincial party caucus at a time over Zoom. Joining the Executive Council were representatives from the Indigenous Trustee’s Council and provincial student trustee leaders. The meetings were an hour in length and included two agenda items: 2021-22 Education Funding and The Future of Public Education.

The purpose of OPSBA’s Virtual Advocacy Day meetings was to re-introduce OPSBA and its priorities to the government and the opposition parties. It was also an opportunity to increase and elevate the overall awareness of the Association and its advocacy efforts. We also encouraged trustees to reach out to their local MPP(s) to set up a phone call or virtual meeting during the first 2021 constituency week, which occured March 15 to 18, 2021. OPSBA staff have developed a PowerPoint slide deck that could be used.

More than 50 public school board trustees and student trustees from all regions of the province were in Toronto on November 25, 2019, to take part in OPSBA’s second Advocacy Day. The day began with a news conference that released the results of polling and research done in partnership with Nanos Research. This initiative bolstered OPSBA’s advocacy position on key issues, such as the importance of investment in public education, Indigenous Education, curriculum, mental health supports and the importance of electing trustees.

OPSBA Advocacy Day provided an opportunity for OPSBA representatives to build on collaborative relationships with provincial stakeholders – both MPPs and political staff.

OPSBA Advocacy Day featured meetings and conversations with all four political parties – the Progressive Conservatives, New Democrats, Liberals and Greens. President Abraham and Executive Director Rusty Hick also met with staff from the Premier’s Office, the Ministries of Education and Municipal Affairs and Housing, and the Treasury Board Secretariat.