​Student trustees are an important and valuable voice in representing the interests of the student body at meetings of the board. 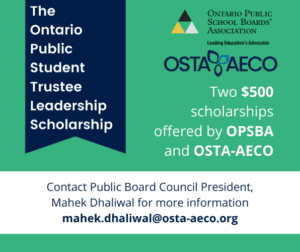 The Ontario Public Student Trustee Leadership Scholarship is an award jointly provided by the Ontario Public School Boards’ Association (OPSBA) and the Public Board Council of OSTA-AECO. The intent is to recognize outstanding achievement in a leadership role and provide financial support to a graduating public board student trustee to assist with their post-secondary education plans (University, College, or Apprenticeship).

Student trustees represent the voice of students in decisions about education and they help keep students informed about important decisions that affect them. They play an important role in the education governance process and are actively working at the local board and provincial levels on a number of initiatives.

This scholarship is based on an outstanding initiative accomplished during the student trustee’s term and how the initiative positively impacted the students in their board. Two scholarships, in the amount of $500 each, are awarded.

The winners of the 2021 scholarship were:

The winners of the 2020 scholarship were:

All submissions were reviewed by a committee comprising OSTA-AECO’s Public Board Council executive members and trustees with the Ontario Public School Boards’ Association.