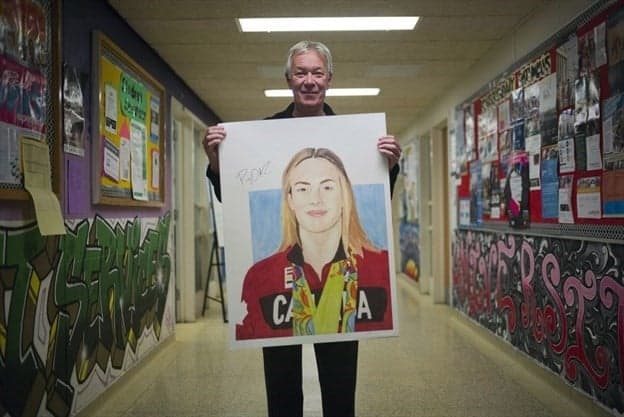 A portrait of Olympian swimmer Penny Oleksiak was unveiled at the TDSB’s Monarch Park Collegiate recently, in honour of her achievements at the 2016 Olympic Games.

Oleksiak became the first Canadian to win four medals in the same Games and the country’s youngest Olympic champion. She won gold in the 100m freestyle, silver in the 100m butterfly, two bronze medals in the women’s freestyle relays, and Canadian hearts everywhere. At the time, Oleksiak was also enrolled as a student at Monarch Park Collegiate.

One hundred limited-edition prints of the portrait signed by Oleksiak and the artist, Jeffrey Sprang, are for sale. The proceeds will support swim programs at various Toronto District School Board schools.

Sprang’s art has supported education in Canada and around the world. In June 1990, he met Nelson Mandela at Central Technical School which led to a limited-edition print in support of the Nelson Mandela Children’s Fund Canada. His work has also supported the literacy development charity, One World Schoolhouse Foundation. Sprang joined OPSBA as its communications director in 1999 and over a period of 18 years solidified a remarkable reputation as the “go-to guy” for straight talk on public education.

For more information and to purchase a print, visit the TDSB’s SchoolCashOnline website