The Award of Merit in Memory of Dr. Harry Paikin recognizes excellent service to public education from an active or retired trustee. 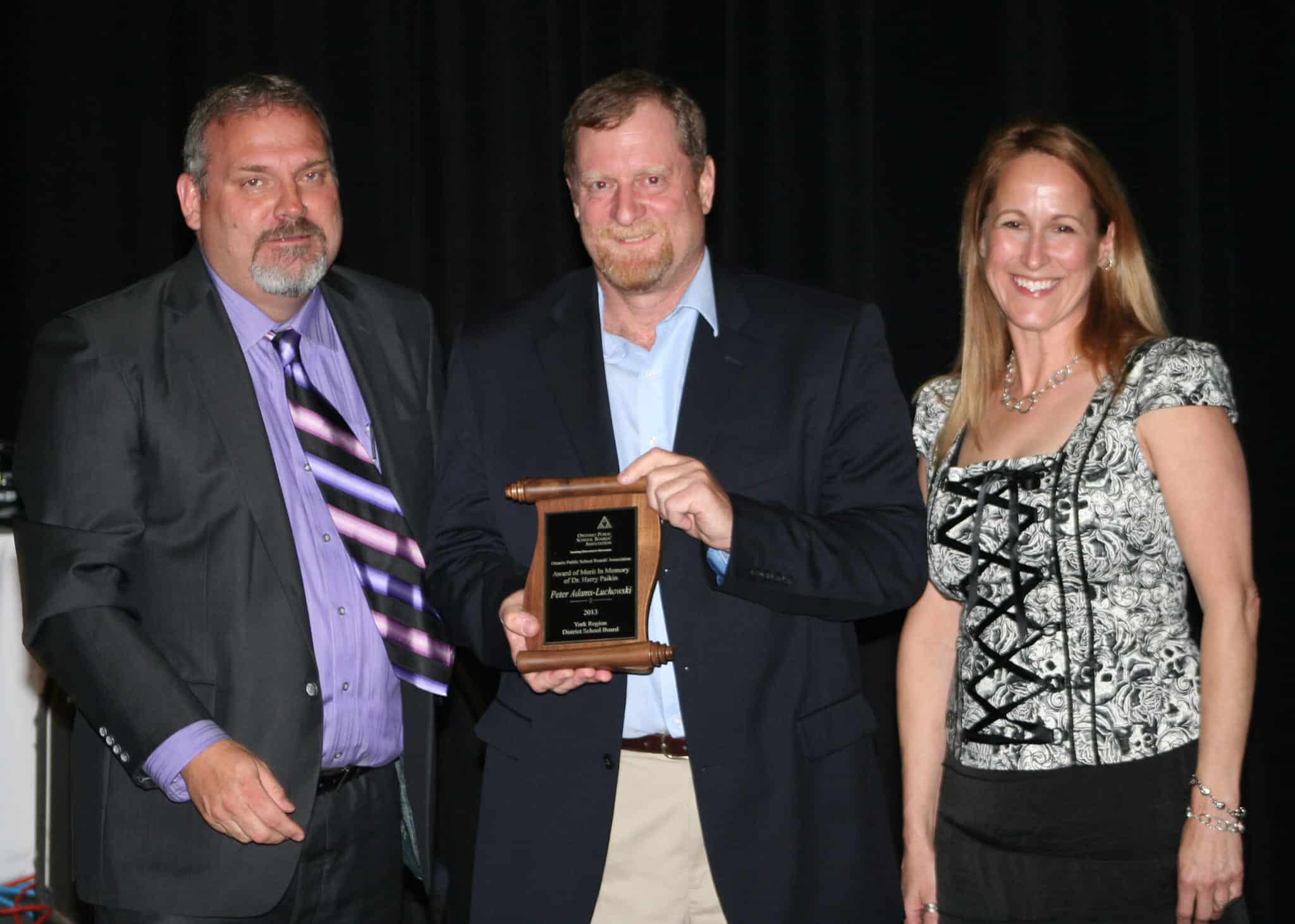 Peter Adams-Luchowski is this year’s recipient of the Award of Merit in Memory of Dr. Harry Paikin. Elected to the York Region DSB in 2007, Adams-Luchowski is highly regarded by his fellow board members and the staff at the schools under his care for his dedication to students and willingness to help those needing extra support, both in education and in the larger community. He is also a strong supporter of women in the trades, having provided a number of Ontario Youth Apprenticeship Program opportunities for female students within his own company.

Adams-Luchowski has served on many board committees over the years, including the Budget Committee; the Student Discipline Committee, which he chaired from 2010; the First Nations Liaison Committee; and the Program Planning Committee. In 2013, he has served as a board of directors alternate and an alternate voting delegate with OPSBA.

The Fred L. Bartlett Memorial Award is given to an active or retired member of the teaching profession to honour outstanding service to public education.

Leigh Cassell is the recipient of the Fred L. Bartlett Memorial Award for 2013. Cassell started her career with the Avon Maitland DSB in 2004 as an occasional teacher and by 2006 was teaching full-time at her current school, Stephen Central Public School in Crediton.

Cassell is an enthusiastic advocate for the use of technology in the classroom; her grade 2 and 3 classes use Skype to learn from students across town and around the world. Her belief that education should be accessible to every student sparked the idea to create a database of human talent and expertise as a resource for classroom teachers. The result was the Digital Human Library (dHL), www.digitalhumanlibrary.com, launched in 2011.

Recently, the dHL has garnered her national media attention and speaking engagements at conferences in Ontario and the United States. School staff and parents speak highly of Cassell for her excellent teaching and collaboration skills.

The Award of Merit in Memory of Jack A. MacDonald honours a student who maintains an excellent academic record while making an outstanding contribution to his or her school and community.

Brian Grant, a student at St. Clair Secondary School in Sarnia (Lambton Kent DSB), is this year’s recipient of the Award of Merit in Memory of Jack A. MacDonald.

Brian is a talented athlete and an integral member of many of the school’s sports teams. He led the senior boys’ volleyball team to local championships each year from 2010 to 2012. In addition to maintaining an excellent academic record, he acted as president of the Key Club, a club that leads fundraising in the school for local charities. Serving his community has been important for Brian, who has held a number of positions with the Sarnia Rotary Club. He will be remembered for launching the Twin Bridges Sarnia Interact, a service group for young people, also sponsored by the Rotary Club.

The OPSBA Award of Excellence Achievement Award is given to honour the highest overall service to public education by non-teaching staff, parents, volunteers and community partners involved in education in member boards.

Catherine Soplet, a volunteer with the Peel DSB, is this year’s recipient of the OPSBA Award of Excellence.

Catherine Soplet began as a volunteer in her children’s school in 1996. Her early contributions involved activities within the Thorn Lodge school community in Mississauga, but a term on the parent council from 2007 to 2009 proved a catalyst for change and launched her service into a wider arena. Working with the school’s council and senior administration, she lobbied for, and secured, funding from the Ministry’s newly created Parents Reaching Out initiative. The grant was used to run a series of literacy workshops for parents in the Thorn Lodge and adjacent school communities. These workshops reached out to less affluent parents and newcomer families, providing child care and transportation where needed, with sessions and materials available in Farsi and Urdu.

Building on this success, Soplet broadened her sights and began to share her expertise with other school councils within the board. She became familiar with the variety of support services available for children in need at the municipal and provincial levels, and worked to forge networks between the board and these agencies. Her talent for networking has helped the Peel board maintain stronger relationships with these agencies and support the board’s children in need.

Carlos Santander-Maturana and Laura Sylvestre from the Lakehead DSB are the recipients of the 2013 OPSBA Achievement Award.

Carlos Santander-Maturana is an education assistant at Westgate Collegiate and Vocational Institute who has made outstanding contributions to human rights at his school, in his community and at the provincial level. At Westgate, in addition to coaching soccer, he is a member of the Gay Straight Alliance and is actively involved in anti-bullying initiatives at the school. He sits on a number of committees with both the local and provincial chapters of the Ontario Secondary School Teachers’ Federation and has been honoured for his service and leadership by OSSTF and the Thunder Bay and District Labour Council respectively.

Laura Sylvestre is a Thunder Bay mother with three children with Autism Spectrum Disorder. For the past eight years she has worked tirelessly with the Thunder Bay chapter of Autism Ontario, helping to raise awareness in the community about the condition, taking on increasingly challenging roles. In May 2013, she was elected president of the chapter. Through her involvement with this volunteer-driven organization she was given the opportunity to sit on the Lakehead Public Schools Special Education Advisory Committee and was elected its chair in 2012.