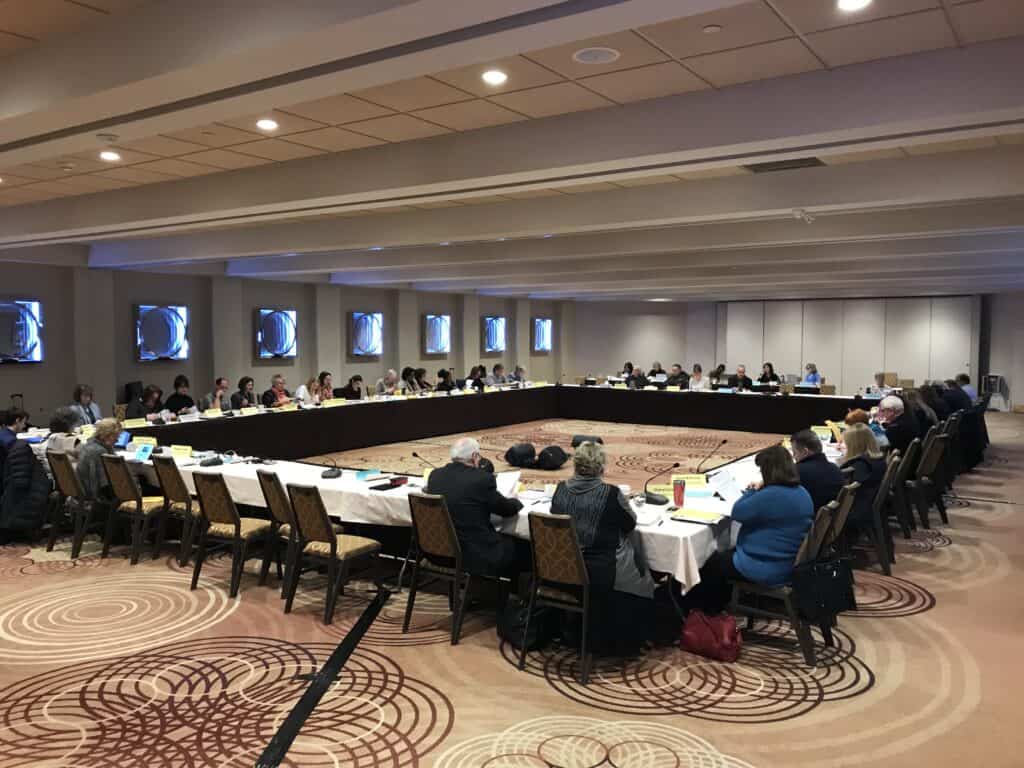 The OPSBA Board of Directors held a meeting on Feb. 23 and 24, 2018, in Toronto. An acknowledgement that the meeting was being held on the traditional territory of the Haudenosaunee Confederacy, the Mississaugas of the New Credit First Nation and the Métis Nation was provided by Trustee Elaine Johnston, the Indigenous Trustees’ Council‘s Board of Director member.

Ted Doherty, Executive Director of the Ontario Education Services Corporation (OESC), joined Directors on the evening of Feb. 23 to give an overview of the organization’s work.

Labour Relations
A confidential report on developments in the labour relations sector was provided.

Executive Compensation Act and Regulation
A confidential report related to the implementation of the executive compensation framework was given.

Working Group – Education Service Agreements (ESAs) and Reverse Education Service Agreements (RESAs)
This committee has met four times. The Ministry is moving forward with legislation that would enable it to flow money through school boards to an approved list of First Nations or First Nation Organization-operated schools. Further discussion has occurred regarding money flowing to school boards for on-reserve students attending provincially funded schools off-reserve. Concern was expressed that there need to be formal agreements to ensure that money is spent appropriately.

TRC Curriculum Steering Committee
Training for school board teams has taken place and the first draft curriculum in Social Studies and Grade 10 History was released during Treaties Recognition Week. The Ministry’s goal is to fully implement the curriculum for the 2018-19 school year. The Council has expressed ongoing concern about the need for teacher professional development to ensure the curriculum is in fact taught, and that teachers know the real history.

The next meeting of the ITC will take place at the OPSBA Annual General Meeting in May.

Finance
Updates were provided on the School Energy Coalition. More information on this can be found on the Ontario Education Services Corporation website.

Student Transportation
As part of the Ministry’s ongoing multi-stakeholder engagement to solicit input and feedback to renew the vision of student transportation in Ontario, OPSBA and the other trustee associations met with the consultation working group in January to provide initial comments. OPSBA is currently undertaking a survey of all member school boards and will use this feedback to provide formal input to the working group.

The B Memo and proposed revisions are available at https://efis.fma.csc.gov.on.ca/faab/B_Memos_2018.htm.

Community Hubs
An update on recent developments related to community hubs was provided. The Community Hubs Capacity Development Reference Group hosted by the Ministry of Infrastructure has begun meeting again after a break in fall 2017. Meetings were held in December 2017 and February 2018 and attended by OPSBA staff.

Four community hubs projects across the province have been selected to receive support under the Surplus Property Transition Initiative (SPTI), the government announced on January 30. Through the SPTI, the province will provide funding to cover property holding costs such as ongoing operating and maintenance costs, for up to 18 months. During this time, the partner community groups will seek to find additional partners and develop long-term business plans to transition the properties to community hubs. Three of the four projects are vacant schools currently owned by OPSBA member boards, with the fourth being a Catholic elementary school in Hamilton.

Legislature and Government Relations
An update on activities of the Legislative Assembly of Ontario was provided. The Assembly resumed on Feb. 20, 2018.

Bill 193, Rowan’s Law
This bill was introduced in December 2017 and, if passed, would amend the Education Act to provide the framework to govern concussion prevention, detection, management and awareness in amateur competitive sport and schools. The bill would require sport organizations and school boards to implement the following:

Bill 198, Student Absenteeism and Protection Act, 2018
This private member’s bill was introduced on February 21 and would make chronic absenteeism a child protection issue and would require school principals to report such issues to the Children’s Aid Society. OPSBA will follow up with the Ministry about their support.

PPM 150 School Food and Beverage Policy Review
At the recent meeting of the Healthy Schools Working Table held on January 17, 2018, the Ministry included an agenda item asking for initial feedback regarding PPM 150, which was issued on Oct. 4, 2010. Since its introduction, there has been criticism about the technical nature of the requirements, the need to include more culturally, economically and regionally relevant choices, as well as updates to reflect changes to Canada’s Food Guide.

Canadian School Boards Association (CSBA) and Nova Scotia School Boards Association
In response to the review and decision conducted by the Nova Scotia government to abolish school board trustees, the CSBA held a news conference in Calgary to convey their frustration and anger over the removal of local democracy. OPSBA has sent a letter to Zach Churchill, Nova Scotia’s Minister of Education and Early Childhood Development.

Trustee Determination and Distribution (D&D) Guide 2018
The D&D Guide outlines the process to be used by school boards to decide how to distribute trustees across the board’s jurisdiction. Boards can begin this work after receiving their Population of Electoral Group (PEG) Report from the Municipal Property Assessment Corporation, which was to arrive before February 15. The OESC provides a calculator to assist boards.

Provincial Election and OPSBA Education Day
During provincial elections, OPSBA advocates for non-partisan strategies to engage politicians in issues that focus on education and the well-being of children and youth. OPSBA staff are discussing plans for the 2018 election and the resources to support Education Day in the province of Ontario. On that day, candidates from the four major provincial parties will be invited to attend all-candidates meetings in their ridings across the province. It is expected that this day will be scheduled during the week of May 22-25.

Equity Education Action Plan
Following a recommendation from OPSBA, an advisory committee has been established. OPSBA has representation on the committee.

FSL-Labour Market Partnership Project
OPSBA is leading a labour market partnership project, Meeting Labour Market Needs for French as a Second Language Instruction in Ontario. The project is a three-year initiative, which will be approved on a year-by-year basis by the Ministry of Advanced Education and Skills Development. Following the completion of Year 1, there will be a public release of an interim report, but detailed information about the research phase of the project will remain confidential in order to not compromise final outcomes.

Supporting Students with Prevalent Medical Conditions
PPM 161 has been released in draft form and the Ministry is currently asking for feedback from school boards as soon as possible before full implementation in September 2018.

Transformation Steering Committee (TSC)
This committee’s work facilitates the updating of Ontario’s school curriculum with a three to five-year implementation plan. OPSBA is represented on each of the committee’s sub-committees: the Report Card TSC Sub-committee, the Outreach and Community Engagement TSC Sub-committee and the Equity and Grade 9 Refresh Sub-committee.

Student Well-Being Advisory Committee
This committee reviewed recent research done by the University of Ottawa on revising school climate surveys. It was confirmed that this data belongs only to school boards and individual schools and will not be available to the public to avoid any unintentional consequences such as with the Fraser Institute and EQAO data.

In addition, reports were provided on the following committees:

2018 Summit on Children and Youth Mental Health
All sessions have been finalized for the 2018 Summit in April and registration is open. School boards are encouraged to send teams from their board and include their key community partners for networking opportunities following the summit. This year the theme is Beyond Collaboration: Towards Integrated Systems for Supporting Child and Youth Mental Health. The Summit will be hosted by Traci Melchor, of CTV’s etalk.​