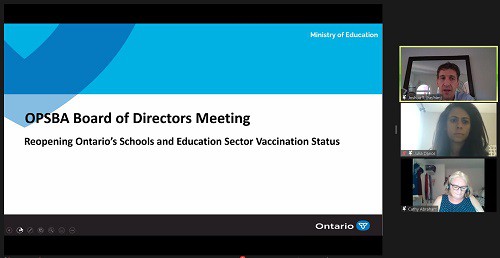 The Ontario Public School Boards’ Association (OPSBA) Board of Directors held a virtual meeting on Zoom on April 24, 2021. President Cathy Abraham gave an acknowledgement that participants in the meeting were connecting to the meeting from numerous traditional territories of the Indigenous peoples of Ontario.

Dr. Joshua Tepper, the Education Health Advisor to the Ministry of Education, joined the meeting to discuss supporting the health and well-being of Ontario students during the COVID-19 pandemic.

Education policy and program issues that were discussed in public session at the meeting are summarized below.

Discussion on OPSBA’s activities related to the provincial government’s remote learning proposed occurred. OPSBA has sent a letter to Minister Stephen Lecce on this issue and has provided school boards with resources to support local advocacy.

A summary of important B and SB memos that have been released since the last Board of Directors meeting in February was provided. B and SB memoranda for 2020-21 and prior years can be accessed on the ministry website.

At the time of the meeting, the 2021-22 Grants for Student Needs (GSN) had not yet been released. It was noted that school boards will be in good shape if the GSN comes before the end of April.

Capital
A call for child care centre projects was made in December 2020, in SB Memo B25 (Request for Early Years Capital Program Funding). Though announcements are currently embargoed, boards were notified in March of successful project applications.

Provincial Budget
The Provincial Budget was released on March 24. Education sector funding for 2021-22 is projected to be $31.3 billion, up $700 million or 2.3% from the originally planned $30.6 billion in 2020-21. With COVID-19 spending, the overall spending for 2020-21 was actually $33.7 billion. This funding will largely flow through the Grants for Student Needs, which are expected to be announced in April along with Priorities and Partnerships Funding. Small increases of 0.3% each year are projected for 2022-23 ($31.4 billion) and 2023-24 ($31.5 billion). Key cost drivers will be the number of school-aged children and inflation.

Since the last Board of Directors meeting, members of OPSBA’s Indigenous Trustees’ Council (ITC), have participated in several Ministry of Education stakeholder consultations, including on the issues of de-streaming of Grade 9 mathematics, Indigenous languages, and growing concerns around gaps for children living on First Nations who are not able to attend in-person learnings, as well as students live in towns and cities and attending public schools. Access to technology, connectivity for remote learning, support for students at home, and serious concerns around the mental health of First Nations students were raised.

Equity, Diversity and Inclusion at OPSBA

Turner Consulting Group’s Equity Audit of OPSBA is currently underway with a review of internal documentation and processes. Small group sessions and interviews with Executive Council and OPSBA staff are starting in the next few weeks.

The current parliamentary calendar for the Legislative Assembly of Ontario includes a final constituency week May 24 to 27 and MPPs in session until June 3.

Manitoba Legislation – Bill 64, The Education Modernization Act
On March 15, Manitoba’s Minister of Education Cliff Cullen released the province’s plans outlining significant changes to the Manitoba school system, including the elimination of all but one of the province’s school boards and elected trustees. The changes, which are expected to be in place by the summer of 2022, include merging school divisions and creating a provincewide education authority. The overall plan can be found in the document Better Education Starts Today and follows the recommendations from a 2019 Commission Report Kindergarten to Grade 12 Education.

The legislation to enable these changes is Bill 64, The Education Modernization Act which was introduced on November 2, 2020. The Manitoba School Boards Association (MSBA) has a dedicated webpage for more information and a campaign called Local Voices, Local Choices to encourage individuals to comment about the implications of Bill 42.

OPSBA will continue to monitor the legislation and work with the MSBA and CSBA on joint advocacy efforts.

Updates were provided in private session on recent developments related to labour relations.

An overview of recent media activity and OPSBA’s current future advocacy and awareness planning was provided. For more:

French as a Second Language (FSL)

Phase III of the FSL Labour Market Partnership Project is complete and the executive summary and final report will be publicly released soon. The Partnership members have expressed a commitment to continue their collective work beyond the original three-year labour market partnership mandate. OPSBA was successful in receiving funding from the Ministry of Education to continue this work and is now mobilizing the labour market partnership findings, strategies and practices with English language publicly funded school boards.

The three additional pan-Canadian initiatives funded by the federal and provincial government through the Department of Canadian Heritage FSL Teacher Recruitment and Retention Strategy are:

The final pan-Canadian reports are complete and in the design phase and will be available late April 2021 on the OPSBA website. Pilot projects are underway to implement high potential strategies and approaches in various provinces.

OPSBA’s Project Compass is reviewing the Association’s internal governance framework and practices. The Project is being led by 1st Vice-President Michael Barrett and 2nd Vice-President Kathleen Woodcock, with recommendations to be brought to the 2022 Annual General Meeting in June 2022.

Over the months of February and March, sub-committees developed questions for inclusion in the OPSBA Spring Survey 2021, which was finalized and sent directly (by email) to all trustees in member boards on March 26.  The deadline for completion was April 22.

The National Gathering on Indigenous Education and CSBA Congress will take place virtually for three afternoons, July 7 to 9, 2021. Both events are being organized and hosted in collaboration with the Canadian Association of School System Administrators (CASSA), and promise to be unique and interactive. Register now here.