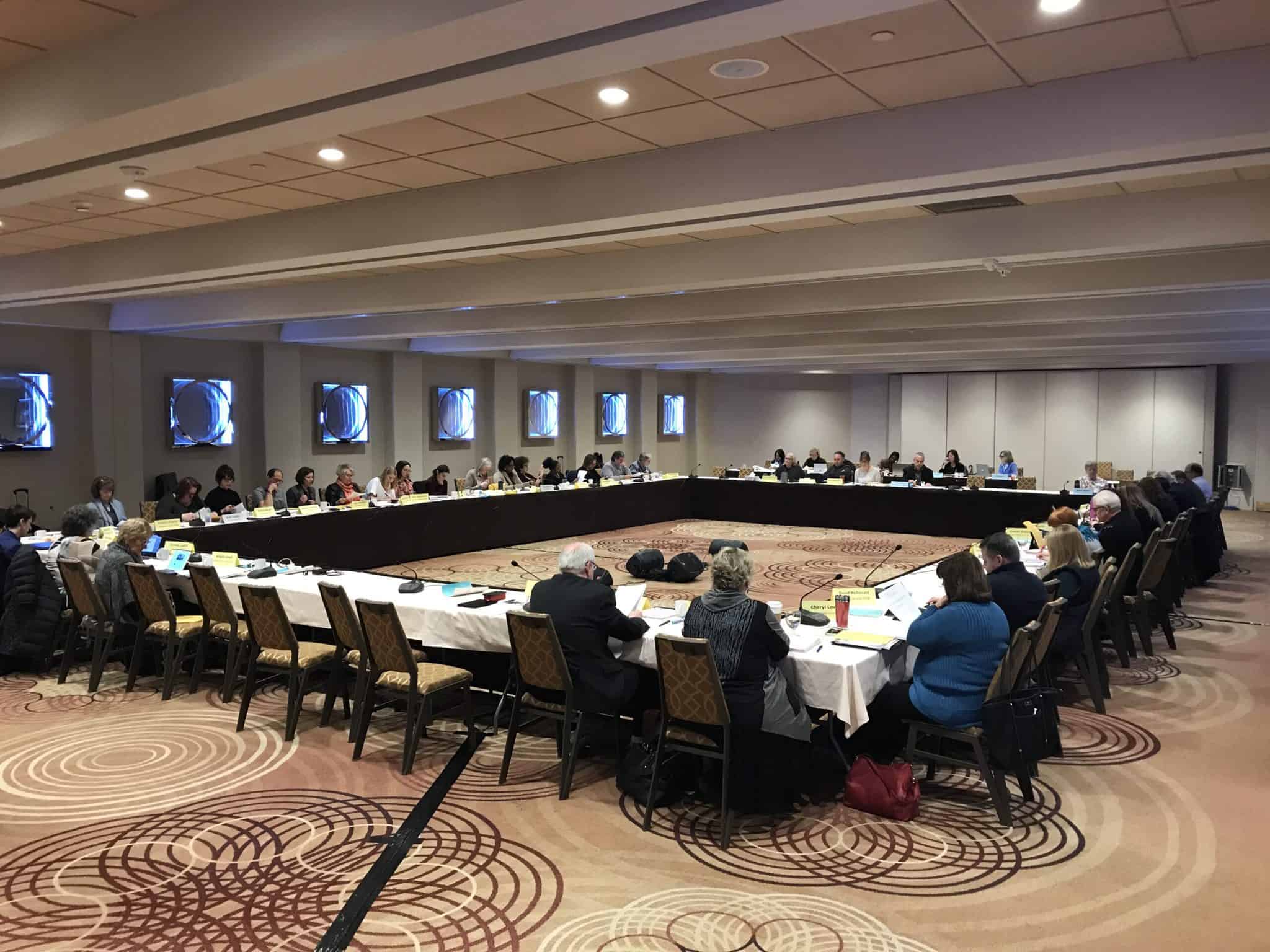 The OPSBA Board of Directors held a meeting on April 20 and 21, 2018, in Toronto. OPSBA President Laurie French gave an acknowledgement that the meeting was being held on the traditional territory of the Haudenosaunee Confederacy, the Mississaugas of the New Credit First Nation and the Métis Nation.

Finance
Updates were provided on the following issues related to education funding:

Student Transportation
As part of the Ministry’s ongoing multi-stakeholder engagement to solicit input and feedback to renew the vision of student transportation in Ontario, OPSBA and the other trustee associations met with the consultation working group in January to provide initial comments. OPSBA undertook a survey of all member school boards and used this feedback to provide formal input to the working group on April 4.

TRC Curriculum Steering Committee
The Committee met on April 9, 2018 to review the curriculum progress that has been made to date, and to provide advice on progress for Phase 2. Training took place for Board staff in December, 2017 and January 2017 on the mandatory curriculum revisions made in Phase 1, and the documents were released on April 6. These revisions focused on social studies and history courses from Grades 4 to 10. Phase 2 will revise the Grades 1-3 social studies curriculum, Grade 9 Geography, Grade 10 Civics, and a set of courses in Grade 11 and 12 Canadian and World Studies and Grade 11 and 12 Social Sciences and Humanities. Phase 3 is anticipated to be revisions to other elementary and secondary curricula in areas such as literature and English courses.

Communications and Media Relations
Updates on recent OPSBA communications issues were provided. There has been some media activity involving OPSBA since the February Board of Directors meeting, which can be found on the OPSBA website. OPSBA sent out one news release in the past two months:

Communications support was also provided for issues and projects including:

Legislature and Government Relations
An update on activities of the Legislative Assembly of Ontario was provided. The Assembly resumed on Feb. 20, 2018. The writ of election is set for May 9, 2018, with the next provincial election on June 7, 2018. There will be a total of 124 ridings in play for the next election, and Elections Ontario has now updated their website to include the listing of all electoral districts.

Bill 31, Plan for Care and Opportunity Act (Budget Measures)
This legislation is the government’s budget bill and was introduced on March 28, 2018, by Minister of Finance Charles Sousa. The bill has been time allocated with public hearings scheduled for April 26.

Provincial Election and OPSBA Education Day
OPSBA staff have finalized plans for the 2018 election and the resources to support Education Day on May 23 in the province of Ontario. On that day, candidates from the four major provincial parties will be invited to attend Provincial Candidates Meetings in their ridings across the province. Staff have created an OPSBA 2018 Provincial Election Package that highlights the Association’s priorities and includes a set of questions for each party.

School Board Governance
Last Fall, OPSBA participated in a ministry consultation that included five areas of discussion: Code of Conduct & Integrity Commissioners, Trustee Honoraria, Student Trustees, Electronic Meetings and Director of Education Qualifications. Following the release of the 2018-19 GSNs, the government sent a memo outlining the next steps for each of these topics, including Trustee Honoraria which was identified in the GSN. There is to be an interim increase of $400 raising the new base limit to $6,300. It must be noted that many of the decisions and directions taken reflect OPSBA’s advocacy work.

FSL-Labour Market Partnership Project
OPSBA is leading a labour market partnership project, Meeting Labour Market Needs for French as a Second Language Instruction in Ontario. The project is a three-year initiative, which will be approved on a year-by-year basis by the Ministry of Advanced Education and Skills Development. An interim report following Year 1 of the projected is expected to be released by the end of May.

Summit 2018
The 2018 Summit for Children and Youth Mental Health was hosted by the Ontario Coalition of Children on April 12 and 13, 2018. This year the theme was Beyond Collaboration: Towards Integrated Systems for Supporting Child and Youth Mental Health. Sessions focused on working across tiered systems of support for promotion, prevention and intervention.

OPSBA representatives continue to participate in additional provincial committees, including:

OPSBA Ad-Hoc Committee regarding Student Trustees
The Board of Directors unanimously passed a one-year pilot for additional involvement of student trustees in OPSBA for the 2018-19 school year.

OPSBA Annual General Meeting
The 2018 Public Education Symposium (PES) was held from January 25 to 27 at the Sheraton in Toronto in partnership with ACÉPO. Speakers included Professor Yong Zhao of the University of Oregon and University of Kansas, Minister of Education Indira Naidoo-Harris, Patrick Case, Kevin Lamoureux and more.​